Everything is shifting from a physical, tangible experience to a more personalized, yet virtual interface. The dating game has changed with Tinder and you can even experience landing on the moon from Apollo 15 by just putting on those VR goggles. The dynamics of life have changed and with that has changed your lifestyle.

Have you ever visited an exhibition? The hallways are swarming with people, everyone wants to go around in that stipulated time. Other than the high ticket fares, you can only visit the one exhibition on display for the weekend in your city, not those in Paris or Sydney.

Cryptex has developed virtual exhibition software, an exhibition on the tiny screen you can carry around the entire day. Unlike the conventional, physical expos, this application allows you to access any exhibition from over the world, which is on display in the application. While the end user can choose the category of expo they wish to visit, the businessmen and companies can get a filtered audience, instead of a large footfall not converting into business.

We at Cryptex have made sure that the virtual touch doesn’t sideline the human needs. With an inbuilt chat system using both audio and video functionality, the user can communicate with the exhibitor freely. Apart from reading the business brochures stacked on the book stand by the booth, the visitor can add it to his briefcase for referencing later. 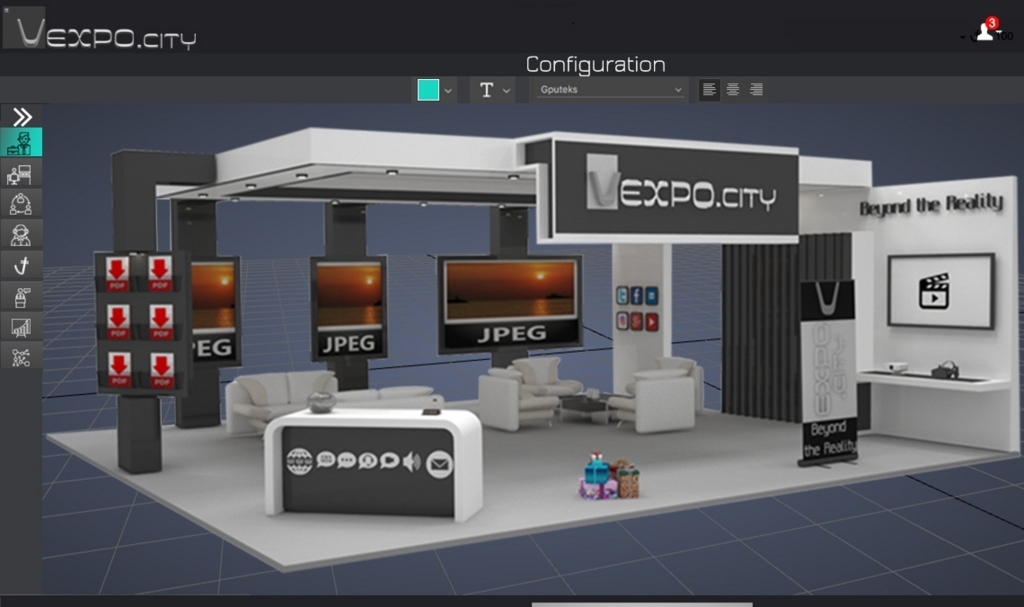 Owners can present an online presentation of their work, products or simply an informative tour of the business. For future communication, they can provide their social media handle links along with the website link or Email ID on a virtual booth.

A feature of exchanging visiting cards is also provided on this booth. This can be treated as a trade show management software.

The next step is to include a VR feature enabling the users to have a wholesome experience, touring in any exhibition they wish to.

Fabric provides an interactive object model on to of canvas element.

Fabric also has a capability to convert the canvas SVG to canvas and canvas to SVG.

What should you do with Fabric.js

Using Fabric.js you can create a populated object on canvas like a simple geometrical shape or complex shapes.

You can upload an image on canvas and perform manipulation on an image like re-size image, rotate

You can add text on the canvas and perform formatting of text, like add font color. Add a text background color, change the font of the text, change the size of the font, etc.

Fabric.js have built-in animation you can easily apply any object of the canvas.

Fabric.js provides a free drawing to create anything you like.

You can save canvas as a png, jpg, SVG and JSON format.

How you can integrate fabric.js into rails application

There is two way to integrate fabric.js into rails application.

1. With the help of ‘fabric-rails’ Gem

2. With the help of Fabric.Js CDN.

With the help of ‘fabric-rails’ Gem

You can easily use fabric.js in rails with the help of ‘fabric-rails’ gem.

Cryptex Technologies is a Ruby On Rails Development Company with 11+ years of experience in web development. We provide the following services:

CSS Grid is new layout supported browsers. If we compare to with Bootstrap then CSS Grid does not require to include any external libraries, By adding CSS rules to parent (Grid Container) and to child elements (Grid Items).

CSS Grid is a two-dimensional grid layout, we can work with columns and rows. In comparison to Flexboxes (which is one-dimensional), the CSS Grid layout system provides you to build more complex layouts. It is possible we can use both: Flexbox and Grid Layout in CSS.

First, lets get into what is Shopify?

Shopify is an e-commerce platform for online stores.

Shopify gives us a platform for creating our own online shopping stores.

Liquid is an open source template language created by Shopify and which is written in Ruby. All the Shopify themes are built using liquid so we can say it is the backbone of Shopify and is used to load the dynamic content of online stores.

Liquid acts as a bridge between the web layout and the website data.

How does Liquid work with Shopify?

Read the full blog at  http://bit.ly/liquidtemplate

Ruby on Rails is the framework that provides the code to build most of the part of the application. When we develop the feature, the job is to write the parts of the application that help to perform a specific task. Ruby on Rails development contains different sub-framework to complete feature, one of them is Active Job. When rails application requires to perform the queuing backend job Active Job framework can be used to declare job and make it run.

The active job can be used to send emails, calculate billing, send notifications, scheduled clean-ups. It divides the job in small chunks and runs in parallel. Our effort is to provide the customers with a user-friendly and flexible web application.

This can be approached when server response time is effective. So put jobs that take more time of server to execute in a queue and serve in the backend. Scheduling the task in queue backend distribute traffic on the server by allowing to complete the job when the server is free.

To schedule backend job and run the job resque-scheduler, delayed_job gems can be used.

I worked on the project Google Review management that requires to send the notification to the users whenever there is a new google review comes in application. If I have performed send notification in real time to users that will decrease the response time of server. To achieve this, I found the solution to use Active Job framework.

How to create the Active job in rails?

Active Job framework has a rails generator to create job.

Above will generate the below structure.

The created job will be shown as below

ApplicationJob is the base class for Active Job.

Keep Job in the Queue

In this way, we provide our customers with the highest possible sales and social analytics, so that you may get insights into what and where you were selling your music collections and even to whom. Our professionals assist you to take action based on changes in demands promptly and target fans at various sources by simply providing transparent access to discovery and sales analytics.

Features Of Our Offered Solutions

The industry of real estate has expanded enough where buyers are doing an extensive search online before actually making their final purchase decision. The buyers are searching for brokers, dealers, projects, and sellers online which makes the digital marketing even more beneficial for the real estate industry.

Some of the advantages of this Real Estate Application are:-

● Listings with photos and videos

● Get directly connected to the customers

You can build your own brand and also build trust among the customers and get directly connected with your prospective customers.

What are the requirements?

One of the biggest reasons many people stay away from investing in an application is believing that it requires advanced technical knowledge and web design experience to build and manage an application. It's quite the contrary.

There are options to buy or rent the websites.

Eventually, you will start building your brand and connects from the application. Then you can decide whether to sell your application for a profit or to continue to use it. The choice is yours!

I came across such Real estate application which is Online marketing solution to boost your sales.

Cryptex Technologies has developed such an application and set up in your domain in just 1 Day.

In my coding lifetime, I have enhanced and improved my coding style after client feedback and guidance. I have learned over the years of time, that there aspects and points that has utmost importance in the coding of Ruby on Rails (RoR) application.

We as developers start writing code without actually analyzing and understanding the code requirement as well. A messed up code is no one’s favorite and not to be delivered. I am sharing my thumb rules that will surely help you as it did to me.

Indent your code What if you are given a much messed up code to update? I am sure you will get frustrated; in order to write very clear code keep it well indented. In Ruby on rails, though the auto-generated code is four space indented style we should use two spaces to intend our block of code as this is the most widely adapted style. This improves the readability of our code.

Naming convention should be followed as this is helpful for us to understand the purpose of it and at certain places, active record in ruby also works on the basis of names.

Active record uses the same naming convention in order to find out how the mapping between the models and database tables are created.

Say for example a class “Category”, should have a database table called “Categories”. The rails pluralization mechanism is very powerful such that it is capable of pluralizing both regular and irregular words.

When the table name has two words, it should be separated by “_” , e.g. “book_categoryies”. When it comes to model class, it should be singular with the first letter of each word capitalization e.g. “CategoryBook”.

Similarly, the name of methods should be such that it should define the purpose of that method, for e.g. “category_list”.

Rule No. 3: Less If else, Less complex

If else statement is a block of condition where you check the condition if it is true or false.

Rule No. 4: Use of a number of variables

Global variables are accessible globally in the application which means it can be modified from any part of the program hence it let to lack of security of our code.

Hence it is recommended not to use global variables.

Login to quote this blog

You cannot quote because this article is private.